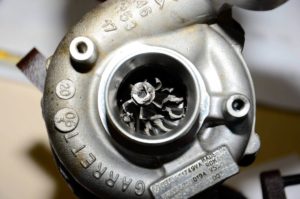 If you bought your turbo diesel second-hand, or if the engine’s clocked up more than 150 000 km, you may be concerned about how much longer the turbo will last. That said, here are 5 reasons why diesel turbochargers commonly fail…

Over time, carbon may build up on the turbocharger’s waste gate, variable vanes, or within the EGR (Exhaust Gas Recirculation) valve. This can lead to poor engine performance and/or heat spots on the turbo itself. These heat spots may result in cracking of the turbo housing, or failure of the impeller-shaft bearing. What’s more, if the EGR suffers excessive carbon build-up, the valve itself may jam in the open position, thus bypassing the engine and allowing the boosted charge to escape. This can cause further reliability issues as a result of rising exhaust gas temperatures.

An overly-blocked catalytic convertor will slow down the turbocharger’s ability to “breathe”. This is commonly known as “buffering”, a problem that refers to increased backpressure within the exhaust system. This then leads to a disruption of the exhaust impeller and subsequent “slowing down” of the intake impeller – which is directly linked to the exhaust impeller. Once the intake system fails to deliver adequate air to the engine, it may lead to higher exhaust gas temperatures and possible turbo / engine failure. Typically speaking, most catalytic convertors don’t last much longer than 150 000 km.

Using poor-quality engine lubricants, or not changing the oil regularly, can lead to sludge build-up and poor oil circulation. Once the oil feed passage (lubricating the turbo impeller shaft) is blocked, the turbocharger’s oil seal and bearing may overheat and fail, leading to total destruction of the turbocharger unit, and possibly further damage to the engine as debris is “inhaled” by the intake system. Another common scenario is that the impeller shaft breaks off, causing the engine to draw oil from the sump. The moment this happens it can lead to either hydraulic lock, or in most cases, a run away engine – better known as “spontaneous combustion”.

Turbochargers need time to spool down, particularly if they’ve been driven hard or revved at high speeds. Shutting the engine down immediately after loading the turbocharger may cause excessive wear of the unit’s bearing, seals and/or impeller shaft areas. If you’ve driven your turbo diesel at high engine speeds, it’s advisable to allow the engine time to idle so that the turbocharger may spool down while oil continues to circulate.

A ruptured oil feed pipe, breather hose, boost pipe or poor-functioning intercooler can lead to total turbo failure or a drastic loss in engine performance. What’s more, a blocked or damaged intercooler can have a big impact on the turbocharger’s performance and longevity. Make sure these components are inspected when you have your vehicle serviced.

Contrary to popular belief, turbochargers are relatively simple mechanical devices that are quite reliable when looked after. The important thing to remember is that turbochargers need good lubrication, good breathing (open intake and exhaust systems) and time to spool down. If you service them regularly, treat them correctly, and invest in high-quality lubrication, they’re sure to go the distance and more.